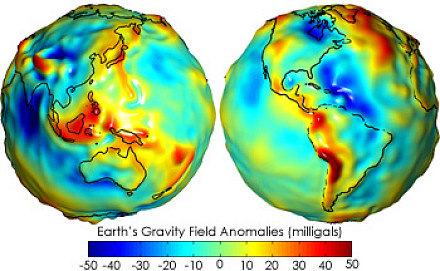 Accurate distance measurements between a pair of orbiting satellites (from NASA's GRACE mission) are able to reconstruct the density of the Earth's surface which is directly correlated to the local gravitational acceleration.

Imagine two cars travelling at constant power on a straight road, one in front of the other. When they come to a hill, the back car will catch up to the front car. Conversely, when they begin to roll downhill, they will separate further apart. By continuously measuring the separation between the cars, we can infer the slope of the landscape. The NASA Gravitational Recovery and Climate Experiment (GRACE) mission tracks the motion of two satellites that share a laser link between them. By using laser-ranging interferomery, NASA can precisely measure changes in the distance between the two satellites as they orbit around the Earth. In analogy to the cars, NASA is able to work out the Earth's local gravitational field and infer the mass changes with this laser interferometric measurement. Increasing the precision of satellite geodesy will better inform us of the melting of ice sheets of Antartica, changes in aquifer level and presence underground bunkers. Hence, the collected data from GRACE is important for a number of reasons: from the monitoring the Earth’s environmental health to mineral exploration.

The present GRACE mission uses a two satellites flying in the same orbit. More satellites flying in formation can potentially offer more information with enhanced sensitivity. The aim of this project is to investigate various future improvements for satellite geodesy. We will use advanced optical interferometric techniques and quantum metrological analysis to explore possible the potential enhancement multi-satellite configurations (not necessarily arranged in a line) could deliver. In this project, students will learn about optical interferometry, optical metrology, quantum noise analysis and space optics. New discoveries uncovered by the team not only be published but will also be shared with international space agencies.