Looking for exploding stars at the bottom of the ocean 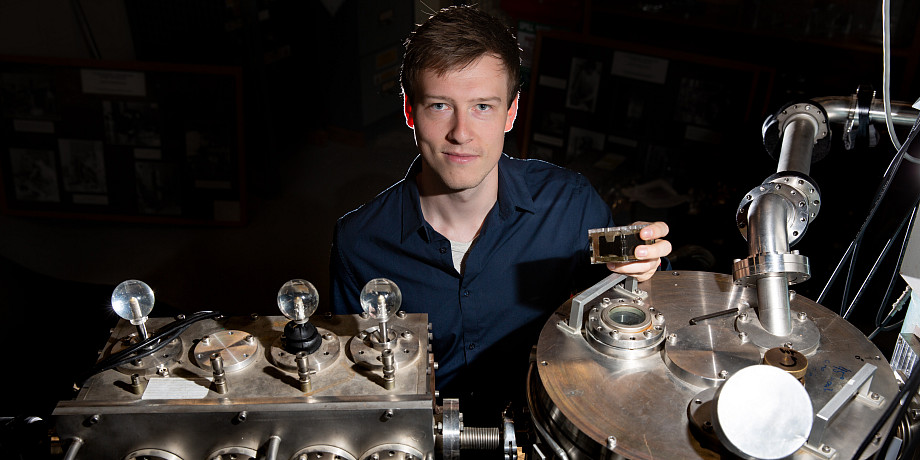 Dominik Koll is studying extreme astrophysical phenomena from millions of years ago, such as supernovae and neutrons stars.

But he is not an astronomer, looking at the sky through a telescope. He's looking at the bottom of the ocean, using a particle accelerator to hunt isotopes like radioactive iron-60.

"When a star explodes, it synthesizes this uncommon isotope, which travels through space and finally arrives on Earth, where it settles on the ocean floor," Dominik says.

"This isotope is only produced in stars, not on Earth: not by fission of uranium, not by nuclear weapons tests, by nothing. So any traces we find here must have come from outer space".

Dominik is also searching for plutonium-244, which originates in extreme astrophysical environments where there are lots of neutrons.

During the solar system's four-billion-year life any primordial traces of either isotope would have well and truly decayed: plutonium-244's half life is around 80 million years, while iron-60's is a mere 2.6 million years.

Yet, Dominik's research group has previously found a couple of atoms of iron-60 in a sample of the ocean floor, amongst the many trillions of stable iron atoms. The results point to a couple of possible nearby explosions, one around two million years ago and another six million years ago.

For debris to reach us, the explosion would have to happen less than about 300 light years away. At that proximity, the explosion would appear as bright as the moon, clearly visible in the day. The only supernova that has been observed near our galaxy since the invention of the telescope was in 1987, when a star exploded in the Large Magellanic Cloud, about 170,000 light years away.

Dominik is now following up with a larger sample to look for more iron-60 and also to see if there any plutonium-244 arrived at a similar time to the iron-60.

As well as giving more information on ancient supernovae, the search for plutonium-244 will help to settle an ongoing debate about where the heaviest isotopes are formed. One theory suggests they are created in supernovae, while a competing theory proposes merging neutron stars.

"We don't know the exact composition of a neutron star, but we do know there are a lot of neutrons, which is exactly what you need to form heavy isotopes like plutonium-244," says Dominik.

"Neutron stars seem to fit, but these events are very rare; there is still the possibility for a significant contribution from supernovae".

His search for plutonium-244 and iron-60 is in a several-kilogram sample from a ferro-manganese crust, collected 4830 m below the sea surface. The sample of the crust provides a very compact timeline, with a few millimeters of material equating to about a million years.

Dominik hopes his study will give a clue about the arrival of the isotopes.

"Iron-60 atoms are a monitor of nearby supernova explosions during the last few million years. Earth may have just accumulated them as it passed through an interstellar cloud. Or they could have been injected into the solar system by the expanding debris of the stellar explosion," he says.

"There are already connections with a huge range of topics in physics, who's to say what's around the corner?"
Exciting nuclei with strange shapes

"My supervisor has been really supportive, don't underestimate how important that is"