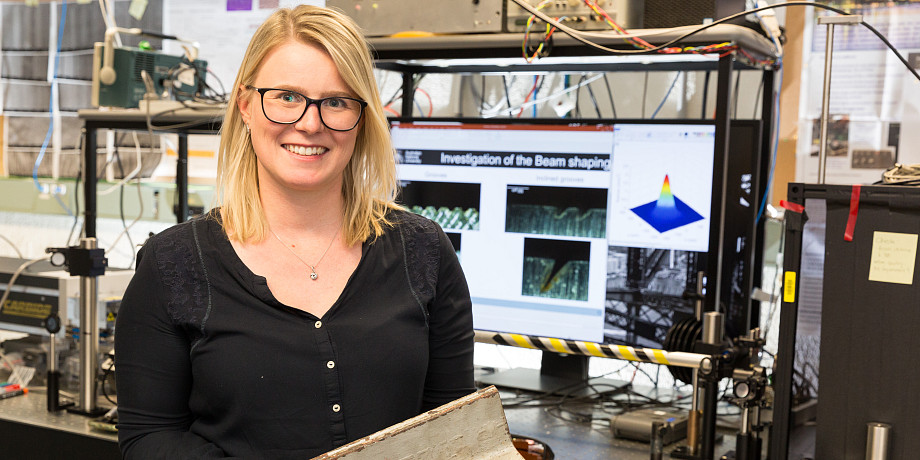 Victoria Zinnecker could never have predicted her career path. First designing textiles for acoustics, which became developing fire-retardant curtains. Then she decided to go back to study, working on a development project on the Ford Mustang. Which, before long, morphed into a project to clean the Sydney Harbour Bridge with lasers.

The projects all seem disconnected, but there is a link: Victoria's research - advanced composite materials - can be applied to dulling noise, retarding fire, providing structural rigidity in a car body or safely removing paint and making it adhere effectively to a century-old steel bridge.

"I've always been in positions in between industry and academia, looks like I'm good at that," she says.

Her four years in industry were not in the original plan. After she finished her masters in mechanical engineering at the Technical University of Munich (TUM), she wanted to go straight into a PhD, but the funding was not available.

Instead she found herself in a small company in the Austrian Alps, nestled among ski resorts, in charge of R&D of textiles for soundproofing. Before long, the company moved into fire retardant textiles.

Then PhD funding became available at TUM, and so she went for an interview, by chance meeting visiting ANU academic Professor Paul Compston, who "talked Canberra up," says Victoria. So, she found herself on a plane to Australia - again, not in the original plan.

"I fell in love with Australia. Every moment free I spend travelling," Victoria says.

The PhD has also fed her appetite for travel, with nine months overseas visiting and working with collaborators in France, Austria and back home to Germany.

And, of course, to Sydney, where she has gone to inspect parts of the Harbour Bridge to study the paint and the steel - as ever, not in the original plan.

Victoria's official PhD project is to develop structurally rigid metal-composite hybrids for the Ford Mustang and broader automotive applications. The composite is a mix of carbon fibres and heat activated plastic that gives an optimal strength to weight ratio. It is then adhered to metal that has been prepared using lasers to make the hybrid structure.

This laser preparation is key, and so Victoria found herself becoming a laser physicist, to research how much energy each laser pulse should have, how frequently pulses can be delivered without heat building up or interference effects and so on.

Doing this aspect of her project with the Laser Physics Centre at RS Phys, it was a short step into the Sydney Harbour Bridge project.

"If you understand how the laser interacts with metal you can clean or make textures - it's the same approach."

Eventually robots will use Victoria's data as they carry lasers around the Harbour Bridge vaporising old paint, rust and dirt, and preparing the steel for new paint, delivered probably by a second robot.

Turning research into real world applications in this way appeals to Victoria, who sees herself moving back to Industry after the PhD.

"You see results faster, get quicker feedback from the market," she says. "Often 80 percent is good enough - 'let's sell it now'; whereas in academia you have to get into the rabbit hole."

That focus of academic research has a good side, Victoria says.

"You don't have a phone, with people disturbing you all the time - you can do what you're meant to do!"

How to take a quantum photograph

"We are the first to bring the use of metasurfaces to the imaging of quantum entangled photons"
How quantum tunnelling created our world.

As a kid Patrick McGlynn loved to take things apart and see how they worked, and then put them back together.
Looking for exploding stars at the bottom of the ocean

"When a star explodes, it travels through space, arrives on Earth, and settles on the ocean floor,"