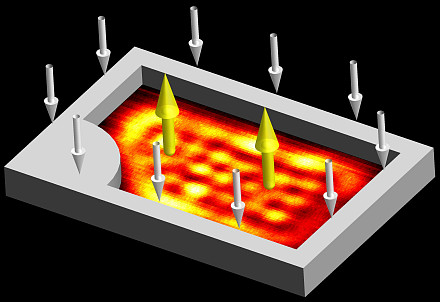 Wavefunction of an exciton-polariton condensate trapped in an optically-induced chaotic billiard potential. This system was used in our lab to demonstrate the non-Hermitian properties of polariton condensates [Gao et al., Nature 526, 554 (2015)]

Exciton polaritons are bosonic composite particles that are part light and part matter. They are composed of photons and excitons (electron/hole pairs) forming in semiconductor microcavities in the strong light-matter interaction regime. Akin to ultracold neutral bosonic atoms, polaritons can undergo Bose-Einstein condensation. In a Bose-Einstein condensate (BEC), millions of bosons occupy a single quantum mechanical state and display collective quantum behaviour, thus bringing the quantum physics onto the macroscopic scale. As one of  the most sensitive and controllable quantum systems, a BEC has applications ranging from precision measurement sensors and metrology standards, through to tests of the fundamentals of quantum mechanics.

The exciton-polariton BEC has many similarities with the BEC of neutral atoms, but can be obtained at both cryogenic and room temperatures in a solid state. Observation of the first exciton-polariton BEC in 2006 has prompted the emergence of polaritonics – a new field of optoelectronics that employs collective quantum effects in solid state, cost-effective devices.

The ANU Polariton BEC group and laboratory conducts both experimental and theoretical studies of fundamental properties of exciton-polariton condensates and their manipulation by structured pumping and external potentials. Students joining the group can be involved in the following lines of investigation:

Students interested in either theory or experiment are encouraged to apply.