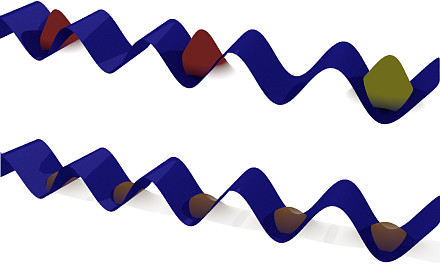 A non-equilibrium lattice state thermalising in an optical lattice

Strongly correlated quantum systems are central to many open problems in modern physics, such as an explanation for high temperature superconductivity or the mechanism behind thermalisation on the quantum level.  An alternative to the solid state systems where such effects normally occur is to use ultracold atoms in an optical lattice, where a degenerate quantum gas is loaded into an optical standing wave potential created by interfering laser beams.  This provides exceptional control over parameters such as the inter-particle interactions and tunnelling rate between lattice sites, as well as access to a range of observables.

This project will construct an experimental apparatus to load Bose-Einstein Condensates (BEC) of metastable Helium atoms (He*) into a 3D optical lattice.  This will involve setting up laser systems, precise electronics and ultra-high vacuum systems, among other techniques.  He* atoms are trapped in a highly energetic excited state and this energy allows individual atoms to be detected using an electron multiplier.  This property will be exploited to measure higher order momentum correlation functions.

Once the apparatus is constructed a number of experiments will be able to be performed, but the project will focus on two main areas:

(2) Studying the non-equilibrium behaviour of these lattice systems following a quantum quench.