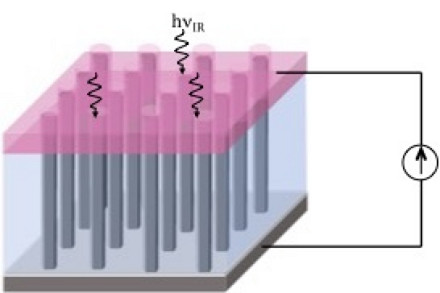 Photovoltaics (PVs) is no doubt one of the leading technologies undergoing enormous growth in recent years to address the growing issues of global warming, climate change and energy shortage. Current solar cell technologies are dominated by Si, which only has 10-15% sunlight conversion efficiency. This limitation is primarily due to the inherent properties of Si. Cells made from III-V compound semiconductors, on the other hand, have much higher efficiencies and can be extended to cover a broader range of the solar spectrum by using multi-junction or hetero-structures. In these devices, efficiencies of over 40% have been demonstrated under concentrated light conditions. In addition, the fast emerging nanotechnology has opened up great opportunities to produce solar cells with lower cost and/or improved performance by employing the unique properties of nanostructures, such as nanowires (NWs).

Nanowires are of great interest in photovoltaics because of (i) the large surface area, (ii) high aspect ratio (iii) intrinsic antireflection effect that increases light absorption and (iv) the ability to form well aligned arrays. More importantly, they provide a paradigm shift in photovoltaics by decoupling light absorption from carrier collection paths, which lead to more efficient charge extraction. In addition, material usage in nanowires is much less than in planar devices that will ultimately lead to significant cost reduction.

Through the project, the student will develop skills in the area(s) of: