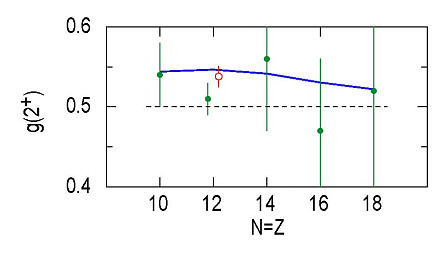 In most of its excited quantum states the atomic nucleus is a small magnet with a dipole field like that of the Earth. Because this nuclear magnetism is determined by the flow of charge and distribution of intrinsic spins within the nucleus, measurements of magnetic dipole moments give important insights into the structure of the nucleus.

This project includes magnetic moment measurements by a variety of methods at ANU and ties in with experiments performed at leading international accelerator facilities such as ISOLDE at CERN. One aspect focuses on nuclei in the sd shell. These nuclei, with proton and neutron numbers between 8 and 20, have been the subject of the most complete shell model studies to date. The figure shows experimental data for the gyromagnetic ratios of the first excited states in the N=Z nuclei in the sd shell. These are 20Ne, 24Mg, 28Si, 32S and 36Ar. Published results are shown as filled circles, whereas the new precise result for 24Mg is the open circle. This measurement, which represents a breakthrough in experimental precision, used a novel technique devised at ANU and was performed by an international team in Orsay, France. New apparatus is being commissioned to perform such measurements at ANU.

Student projects can include developing apparatus and performing experiments, as well as the analysis of data and the theoretical interpretation of results.

No specific background is required, however an interest in nuclear physics (experimental and/or theoretical) is essential.