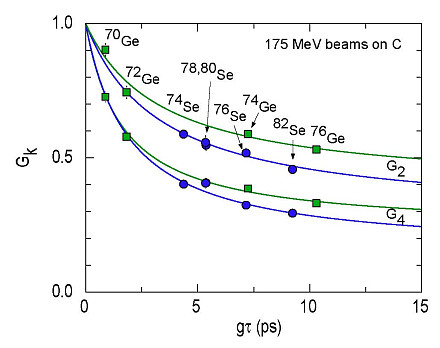 Unexpected difference in hyperfine fields of Ge and Se ions.

Ions leaving target foils at high velocity are highly ionized. The electronic configurations of such ions can produce enormous “hyperfine” magnetic fields at the nucleus, which can be used to probe nuclear magnetism. With modern atomic structure codes, there is a hope that these hyperfine magnetic fields can be calculated by first principles making measurements of the nuclear magnetism possible at new levels of precision.

Such measurements give insight into nuclear structure. There are exciting prospects for measurements on rare isotopes produced by the new radioactive beam accelerators internationally, which we are leading.

Recent attempts to perform ab initio calculations of free ion fields have met with some success, but are yet to explain the ANU data shown in the figure, where Ge (Z=32) and Se (Z=34) ions emerge from carbon foils under the same conditions, but apparently show different hyperfine fields. Students engaged in this project will help uncover the physics missing in the previous calculations through modelling or measurements or both. The project is related to our project on Auger electrons which also uses atomic structure codes and Monte Carlo methods.

The outcome of the project will be an improved understanding of free-ion hyperfine fields for applications to measurements of nuclear magnetism and also an improved understanding of the processes that determine the charge state of an ion after electrons are stripped off by passage through a foil. Students will develop computational and modelling skills using sophisticated codes, gain experience with radiation detectors, electronics, data acquisition, accelerator operations, and data analysis.

Students are best to have taken quantum mechanics and have an interest in atomic and nuclear physics as well as computing.