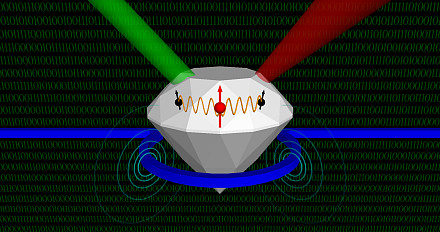 Quantum computers promise a new technological paradigm transcending many of the limits of the ‘classical’ computers used today. Quantum computers have diverse and revolutionary applications, including those related to cryptography, optimising complex engineering designs, economic modelling and the simulation of complex quantum systems, like biomolecules.

Defects in diamond are leading systems in the development of quantum computers and communication networks. Small-scale diamond quantum computers, consisting of clusters of defects, are the only solid-state devices that have demonstrated quantum algorithms at room temperature. Furthermore, quantum networks of diamond defects connected by quantum optical channels are the only networks that have demonstrated loophole-free Bell tests.

This project seeks to both engineer marketable quantum devices in the short term as well as to solve the major barriers to large-scale diamond quantum computers and networks in the long term. Current topics in this project are:

These are challenging topics and there are many aspects of the project where students of different levels can become involved. There are opportunities for both theoretical and experimental work and students are free to choose to their desired mix of theory and experiment.