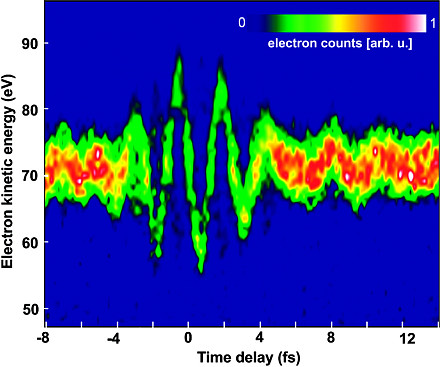 The idea of using femtosecond (1fs = 10−15s) laser pulses as a strobe for studying nuclear dynamics in molecules brought a Nobel Prize in Chemistry and laid the foundation of a rapidly developing field of femtochemistry. The electronic motion in atoms and molecules, which typically occurs within tens to hundreds of attoseconds (1as = 10−18s), remained unexplored by this technique due to the fundamental limit in time resolution. This limit fell with the invention of the so-called “attosecond streak camera”. The camera makes use of the high harmonic generation  process which converts a driving nearinfrared (NIR) femtosecond pulse into coherent extreme ultraviolet (XUV) bursts, at least one order of magnitude shorter than can be produced by conventional laser systems. An attosecond XUV burst sets an atomic electron in motion while the same driving NIR pulse, after a carefully monitored time delay, is used as a strobe. The key ingredient of attosecond streaking is phase stabilization of the driving NIR pulse with a shot-to-shot stability of a few attoseconds. This stability constitutes a built-in temporal ruler of incredible precision. Such a ruler can be applied to a variety of atomic processes to resolve them in time. However, the utility of time-resolved techniques such as attosecond streaking can only be fully realized if one is able to model reliably the electron response to the intense laser field immediately upon ionization, which can only be done with realistic quantum-mechanical calculations.