The Optical Sciences Group performs studies in extreme events, rogue waves and soliton theory. These are considered to be among the most important discoveries in the twentieth and twenty first centuries mathematical and experimental physics.

The group develops basic theory of dissipative solitons that includes high-power ultra-short pulse lasers and giant waves in the ocean. The group is strongly linked to international research laboratories working on the forefront of ocean waves, nonlinear optics and dissipative systems.

Monsters of the Deep

The history of seafaring is filled with romantic stories of far-away lands and fantastic things. Some of these can be dismissed as fanciful sea stories, but others may turn out to have a grounding in real physics. One recurrent report is of rogue waves - giant walls of water that seem to rise out of the ocean from nowhere and disappear just as quickly. Within the laws of linear wave physics this makes no sense. Whilst two waves can meet to create a larger one, the likelihood of such an event concentrating the energy into one monster wave is essentially zero. Yet over the years, reports from experienced mariners and physical evidence of damage to ships continues to mount. 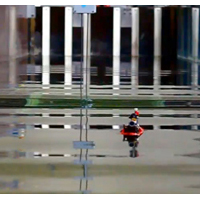 The research team, led by Prof. N. Akhmediev of the Research School of Physics and Engineering at ANU, working with colleagues from Hamburg University of Technology and the University of Turin are conducting experiments in nonlinear dynamics, to try and explain so-called rogue or killer waves. These high-impact 'monsters of the deep', can appear in otherwise tranquil oceans causing danger, and even sinking ships. Our study, published in Physical Review X, shows that the theory is crucial in understanding the development of super rogue waves that could develop in the deep oceans of the world.

Extreme events - towards a unifying concept

Extreme events form one of the most active research topics in modern science. Particular cases include rogue waves in the ocean, space plasmas, superfluids, quantum liquids, floods, financial rogue waves, human stampedes and a variety of other hazards in nature and social life. The aim of these research efforts is to consider extreme events within the frame of a system far from equilibrium or, in other words, dissipative system. This novel approach will allow us to explain, naturally, the enormous amount of energy that extreme event takes out of the external energy source.

Multiple rogue waves 'like' to arrange in geometric order resembling atomic structures with a 'nucleus' and 'electrons'. Can we explain the world of elementary particles based on this mathematical findings? This problem needs careful consideration. Curiously, there may also be some link with the nuclear shell model. The analogies may actually be more profound than at first glance. Further study may explain why the rogue wave clusters arrange themselves in a regular fashion reminiscent of atoms. 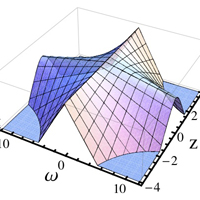 Rational solutions of the nonlinear Schroedinger equation are common models of the rogue waves in optics and in the deep ocean. These solutions have specific triangular spectra that are certainly easily measurable in optical systems and which may be amenable to characterisation in ocean environments. As the triangular feature of the solutions appears at an early stage of their evolution, this raises the possibility of early detection and possible localised warning of the appearance of rogue waves. We anticipate that studying the characteristics of early warning spectra of rogue waves may become an important future field of research.

The dynamics of Fermi - Pasta - Ulam recurrence is associated with a nonlinear phase shift between initial and final states that are otherwise identical, after a full growth-return cycle. The properties of this phase shift are unique for each system, and the magnitude of the phase shift can be described in terms of the system parameters. This phase shift, accumulated during the nonlinear recurrence cycle, is a previously-unremarked feature of the Fermi - Pasta - Ulam problem, and it has wide significance as an essential feature of related dynamics in other systems.