Green hydrogen gets a boost from a thin layer of foil

A thin layer of metal foil could be the key to making green hydrogen production from solar energy a commercial reality.

“This could be a vital step in addressing the intermittency of renewables and accelerate our transition to net-zero emissions by 2050.”

The collaboration included scientists from ANU Research School of Engineering, UNSW, Gumi Electronics and Information Technology Research Institute in Korea and DIFFER in the Netherlands.

Their quest is to eventually build an all-in-one device in which a solar cell creates electricity that it uses to split water into hydrogen and oxygen.

For maximum efficiency the electrodes need a catalyst on their surface, that binds water molecules to the electrode, increasing the efficiency of splitting. First attempts at water splitting with solar energy used catalysts made of rare and expensive metals such as platinum or iridium, which costs around $6000 per ounce.

Scientists were aware some less expensive and more abundant materials such as nickel oxide and molybdenum oxide could have potential as a catalysts – especially if alloyed. However, to realise this potential took years of experimentation and modelling, because the exact structure and porosity of the catalyst surface has a huge influence on the catalytic properties – the larger the surface area with active sites the better.

In the end the catalysts that the team selected were: at the anode (oxygen evolution) a nickel iron hydroxide, which has a surface structure of nanoscale needles that extend up to 100 nanometres above the surface.

The catalyst for the hydrogen evolution reaction, at the cathode, was nickel molybdenum oxide, which forms a surface covered by molybdenum-rich flakes approximately 2 microns across, that contain embedded nickel-rich crystals.

The team also solved a second challenge which has dogged water-splitting technology, of how to robustly fabricate the cells.

To split water into oxygen and hydrogen requires the electrodes to be immersed in electrolyte solutions with extreme pH, either acidic or alkaline. However, such corrosive solutions attack the solar cells, causing them to degrade quickly.

To protect the solar cells researchers commonly sealed them with a layer of the catalyst material. However, the conventional method for depositing such a layer involved immersing the cells into a solution and either heating it or running electricity through it – both of which also damage the cells.

Dr Karuturi proposed an alternative approach, in which the catalysts were deposited separately on a metal foil that was then added as a protective layer to the solar cell.

“It seems simple in retrospect, but it overturned the usual approach,” said Dr Karuturi’s PhD student, Joshua Butson, who was lead author in the study.

“Sometimes the simple ideas are the most powerful. This is a big step towards long-term efficiency.”

With a maximum solar to hydrogen efficiency of 13.6 percent, the device does not have the highest conversion rate, but has unprecedented stability – the team ran it continuously for nine days maintaining efficiency greater than 10 percent.

The method opens the door for a range of new technology said Dr Karuturi.

“The approach can be used with other proven photovoltaic materials to realistically attain high solar-to-hydrogen efficiencies, that approach theoretical limits.” 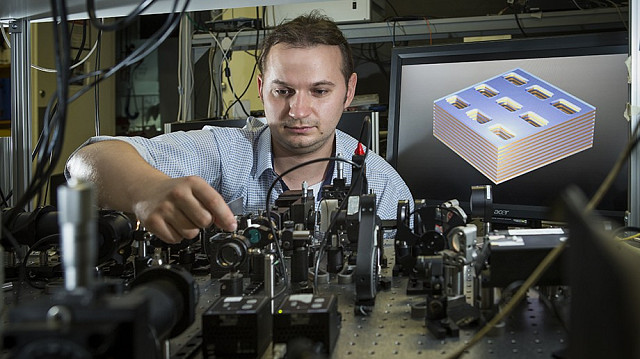 Nanomaterial to drive new generation of solar cells
Physicists have discovered radical new properties in a nanomaterial, opening new possibilities for highly efficient thermophotovoltaic cells that could one day harvest heat in the dark and turn it into electricity. The research team from ANU/ARC Centre of Excellence CUDOS and the University of California...