An ANU PhD physics student who is studying the impact of disease on the cell walls of plants has won the 2018 FameLab regional semi-finals in Melbourne.

Toby Hendy will head to the national finals in Perth on 10 May, after winning the Judges' choice award and the audience choice vote for her presentation which showed what happens when a plant cell is invaded by a disease.

As well as delivering the FameLab presentation at the national final in Perth, Toby will be required to do a presentation to school children. The national winner of FameLab will go on to compete in the international finals on 7 June in Cheltenham, in the United Kingdom.

In Toby's presentation, she used balloons to represent plant cells.

"I popped one of them on stage to show what happens when a cell is infected by disease and then I had a second balloon that I put away in a castle and that castle represented a cell wall which was protecting it from disease," she said.

Toby, who is based at the ANU Research School of Physics and Engineering and was a Westpac Future Leaders Scholar in 2017, is interested in how physics can be used to solve problems in biology, such how to use protect plants from disease.

"A lot of people would recognise plants that have been infected because they show spots and bruises but they also wipe out quite a lot of crops and food supplies every year," she said.

When a plant is infected by a disease, it has a few natural self defence mechanisms to help fight the disease.

"One of those self-defences it creates is a very stiff cell wall around its perimeter and that wall thickens as the disease tries to invade it. So in the physics lab I'm applying pressure to plant cells to try to mimic a disease and I watch how the cells thicken or stiffen in response to that pressure."

Her work is a collaboration between physics and biology, with the overall goal of developing plants that can better protect themselves.

FameLab has also contributed towards Toby's aspirations in science communication and media.

"That's actually a space I want to move into," she said.

Jointly developed sensors open the door to a wearable medical diagnostic device
Scientists from The ANU Research School of Physics and Engineering and The ANU Research School of Engineering have designed tiny optical sensors that open the door to developing a wearable device that allows doctors to medically diagnose people’s health in real time. Associate Professor Antonio... 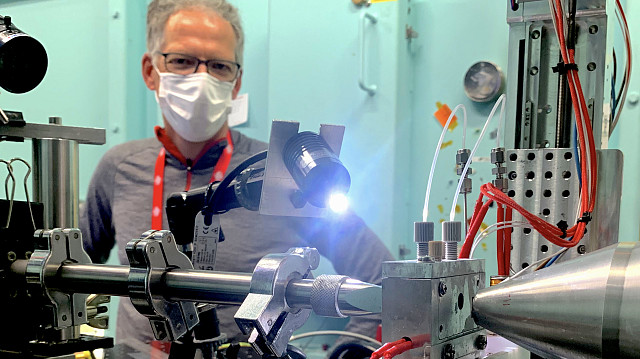 How a coffee machine helped to make perfect nanopores »
An innovative portable manufacturing process, inspired by a coffee machine, has given scientists new insights into fabricating and measuring...

How a coffee machine helped to make perfect nanopores »