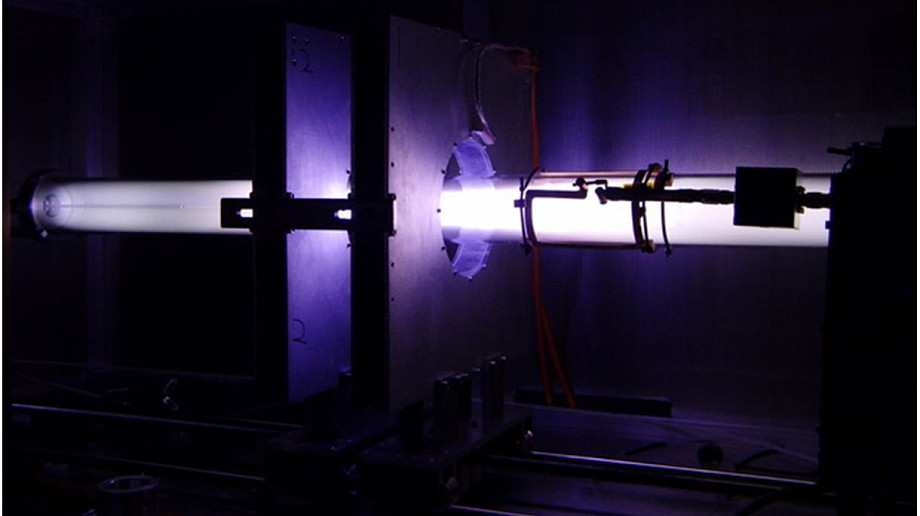 Experiments on low pressure plasmas in the presence of magnetic nozzles are of interest to the electric propulsion community as they provide a good analog for the exhaust plume expanding away from plasma thrusters. The Helicon Double Layer Thruster (HDLT) uses a diverging magnetic field to funnel an expanding plasma into space and by doing so generates a current-free double layer (CFDL), accelerating a high velocity ion beam into the plume, thereby providing thrust.

A large part of my research has focused on expanding plasmas created in the Chi Kung reactor, which was the precursor to the HDLT prototype. The region downstream of the CFDL can be characterised by an axial ion beam and radial lobes of stationary plasma referred to as high-density conics. The conics are ionised locally by hot electrons streaming along the most radial field lines to escape the thruster. These electrons are heated most effectively by the RF antenna and use this energy to ionise background neutrals in the conics. Previously, it was unclear how these electrons and the generation of the conics affected the axial development of the CFDL and ion beam and this has been a focus of my work.

I will also present the first results from experiments conducted in a new plasma source which features a solenoidal magnetic field that can be progressively separated from the region where plasma is created, i.e. the RF antenna. The aim of this study is to better understand particle transport in converging magnetic fields with high magnetic mirror ratios. The results provide new insights into how RF plasmas couple with magnetic nozzles and identify important criteria for high density plasma production which could be relevant for propulsion, astrophysics and fusion communities.