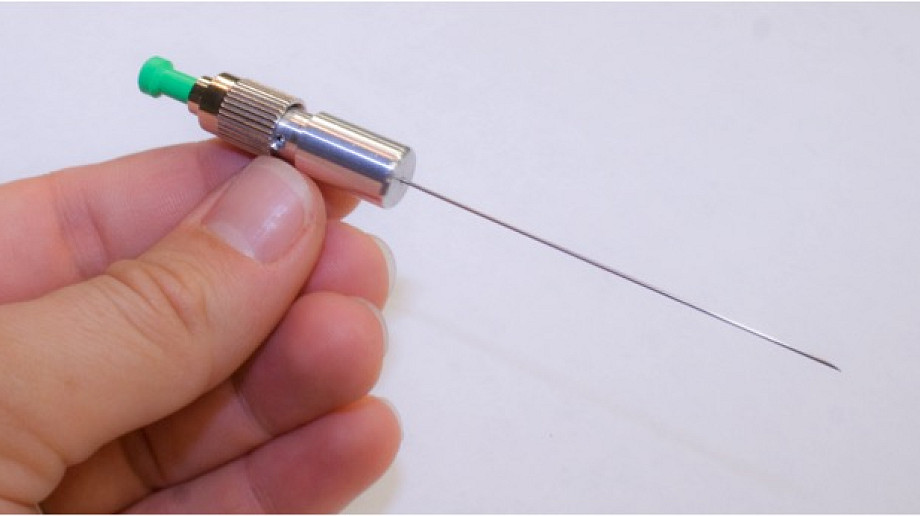 Optical imaging technologies, such as optical coherence tomography (OCT), have the potential to acquire exquisitely high-resolution images of tissue and provide a new generation of intra-operative guidance tools for surgeons. However, their limited image penetration depth places most diseases beyond their reach. Our team has focused on the development of OCT needle probes, highly miniaturized imaging probes that are encased within a hypodermic needle, and that may be inserted deep into tissue. In this talk, I will describe our development of OCT needle probes, and give specific case studies of clinical applications. Recently, we have integrated our probes into brain biopsy needles to enable safer neurosurgery, and have performed our first experiments in humans. In addition, we have developed the first dual-modality needle probes, capable of simultaneously acquiring OCT and fluorescence images, and showed them to be sufficiently sensitive to detect signal from fluorescently-labelled anti-bodies targeted for specific cells types.

Prof Robert McLaughlin is Chair of Biophotonics in the ARC Centre of Excellence for Nanoscale Biophotonics at the University of Adelaide. After completing his PhD at the University of Western Australia, Prof. McLaughlin was a post-doctoral researcher at the University of Oxford. He then left academia for industry, working in a spin-off company from the University of Oxford, and eventually being appointed as Product Manager at Siemens Medical Solutions. He was responsible for the development of three commercial medical products. He returned to Australia in 2007 and took up a position at the University of Western Australia. In 2016, he was awarded the South Australian Premier’s Research and Industry Fund Fellowship. He has published 2 book chapters, 62 journal papers and 7 patents, and been awarded over $5M in research funding. In 2011, he received the National Breast Cancer Foundation Patron’s Award for ‘Innovation and Vision in Research’. In 2014, he led the team named WA Innovator of the Year. In 2015, his team were awarded the Australian Innovation Challenge. His work has focused on the development of optical imaging needles; and on the use of OCT to assess microvasculature.