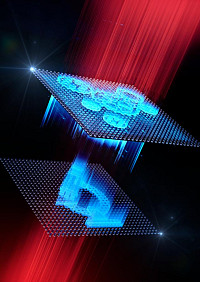 Photonics in the 21st century is undergoing revolutionary transformations driven by nanotecnology. Today we can nanofabricate functional optical components hundreds of times thinner than a human hair that match the performance or even outperform conventional bulky optics.

An important problem yet to be addressed is nonreciprocal optical response at the nanoscale. Nonreciprocal photonics is currently limited to large optical systems, which represents a roadblock for further miniaturisation and integration of optical devices.  The 21st century advancements in photonics might depend on nonreciprocal nanoscale components as much as the 20th century advancements in electronics depended on nanoscale semiconductor diodes and transistors.

A nonreciprocal system exhibits different received-transmitted field ratios when their sources and detectors are exchanged. How can we envision a nonreciprocal optical component? Imagine holding a translucent slide, such as a frame from a film strip or a camera roll. You shine light through the slide and see an image on a wall. Then you flip the translucent slide and see a completely different image. Common sense might suggest that this is impossible, and physics says that this would require to break the Lorentz reciprocity theorem. This project aims to develop and demonstrate such nonreciprocal manipulations of light at the nanoscale.

Students joining the project can be involved in the following lines of investigation:

Background knowledge of optics and electromagnetism is required for this project