Low-energy technology the winner as hybrid particles put up no resistance. 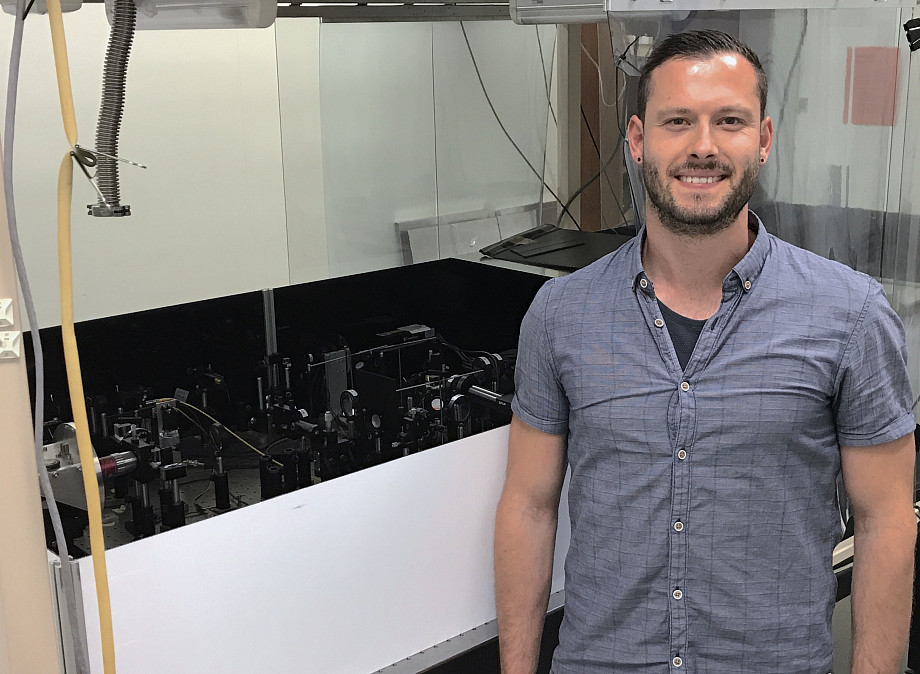 A new sandwich-style fabrication process, placing a semiconductor only one atom thin between two mirrors, has enabled physicists to make a significant step towards ultra-low energy electronics based on a light-particle hybrid called an exciton-polariton.

The breakthrough demonstrated propagation of exciton-polaritons – potential carriers of electronic information – with no resistance (dissipation of energy) at room temperature, as they bounced between two high-quality mirrors.

“In this experiment, when we combine light with excitons to form exciton-polaritons, all scattering processes are dramatically suppressed,” said the lead and corresponding author, Matthias Wurdack, from ANU Research School of Physics, and the FLEET ARC Centre of Excellence.

The ANU-led FLEET team, with colleagues at Swinburne University, Wroclaw University in Poland and University of Oldenburg in Germany, demonstrated for the first time long-range propagation at room temperature without any dissipation of energy, by coupling excitons in an atomically-thin material to light.

Achieving dissipationless movement gives hope for a new generation of electronics technology that has a much lower energy consumption, in contrast with conventional technology, based on electrons and holes (the absence of an electron, i.e. a positively-charged quasiparticle).

Attracted by this prospect, an active research field has developed, focussing on the use of excitons (an electron bound to a hole) because, in principle, they could form a collective superfluid state, enabling them to flow in a semiconductor without losing energy.

However, experiments with excitons have had challenges. Initially excitons were found to be not stable unless cooled to cryogenic temperatures – compromising their low-energy credentials.

A way to make them stable at room temperature was found, by reducing their host material to a layer a single molecule thick. But this in turn creates a new challenge, because any atom out of place quenches the excitons and their interactions with light.

This is a hurdle, because to couple excitons to light, so as to form exciton-polaritons, the thin layer must be surrounded by mirrors, which are usually deposited directly onto the layer. But this process knocks atoms in the thin layer out of place.

Instead, the research group pioneered a different approach, by prefabricating the mirrors and making a sandwich around a thin layer of tungsten disulphide (a class of material known as transition metal dichalcogenides or TMDCs).

This set up allowed excitons in the tungsten disulphide layer to couple efficiently to light that was bouncing back and forth between the mirrors to form the exciton-polaritons.

“We also benefitted from a bit of serendipity,” said Mr Wurdack.

“An accident of fabrication that ended up being key to our success!”

The serendipitous accident came in the form of an air gap between the two mirrors, making them not perfectly parallel.

This differing distance between the mirrors meant that a range of light wavelengths could fit into the air gap, leading to exciton-polaritons with a range of potential energies. This gave the researchers an insight into the movement of the hybrid particles and enabled them to prove that their movement was dissipationless, and extended to tens of micrometres - easily far enough for use in electronic devices.

Apart from creating the slope, that same fabrication accident created a potential well for exciton-polaritons. This enabled the researchers to catch and accumulate the travelling exciton-polaritons in the well – an essential first step for trapping and guiding them on a microchip.

Moreover, the exciton-polaritons were able to preserve their intrinsic coherence (correlation between signal at different points in space and time), which bodes well for their potential as information carriers.

“Counterintuitively, our calculations show that the propagation length is getting longer at higher temperatures, which is important for technological applications.“ said Mr Wurdack.

“There are no experimental results supporting this model yet, making scope for further studies.”

Motional narrowing, ballistic transport, and trapping of room-temperature exciton polaritons in an atomically-thin semiconductor was published in Nature Communications in September 2021.