How a coffee machine helped to make perfect nanopores 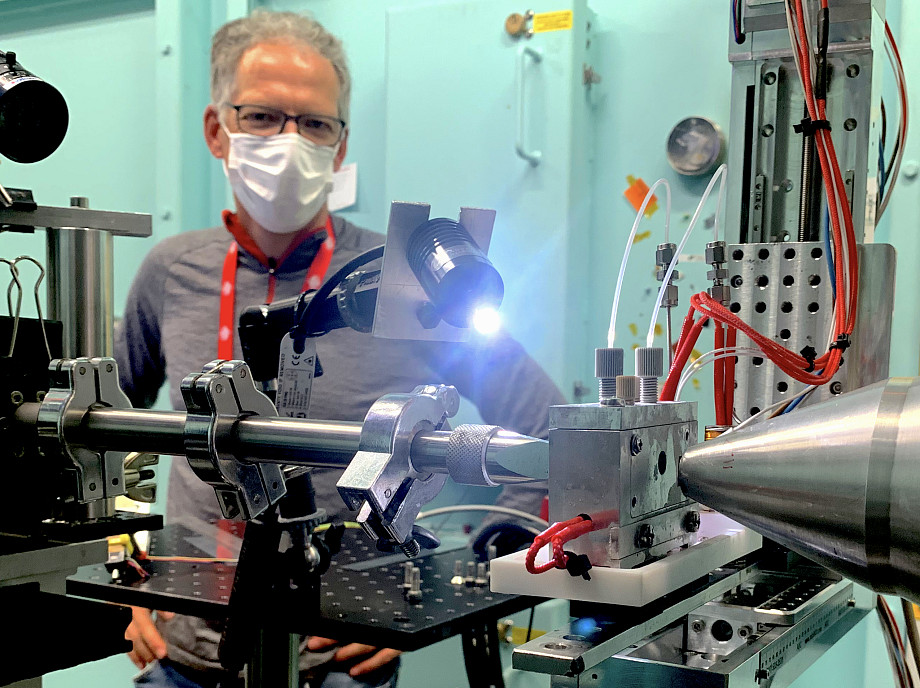 An innovative portable manufacturing process, inspired by a coffee machine, has given scientists new insights into fabricating and measuring membranes full of nanometre-scale pores.

The process creates perfect nanopores in a material, with diameter as small as 10 nanometres (a thousandth of the thickness of a hair), which could be put to uses as diverse as protein separation and filtration, chemical and biomolecule sensing, and water desalination, said lead researcher Professor Patrick Kluth.

“We’ve really taken the technology to another level, and I’m excited about the possibilities that offers us,” said Professor Kluth, leader of a team from the Department of Material Physics in RSPhys.

The team have published their results in the Journals Physical Chemistry Chemical Physics and the Journal of Membrane Science, showcasing their pore-creation success with a thin membrane made of the polymer polycarbonate.

Polycarbonate nanopore membranes have been in production since the 1970s but the exact size and shape of the pores was not precisely measured and so could not be manufactured to tight specifications, said team member Shankar Dutt.

“Most researchers assumed the nanopores were cylindrical, but modelling of flow rates in the 1980s showed that assumption was wrong and gave completely different results,” said Mr Dutt, a PhD student in the Department of Materials Physics.

“We’re the first to quantify the shape of the nanopores, using small-angle X-ray scattering at the Australian Synchrotron in Melbourne. This will have a big impact: if you know the nanopore shape and how the pores form, you can design better experiments for advanced applications such as ultra-filtration, bio-sensors and so on accordingly.”

Better still, the team was also able to determine and control the factors which influenced these properties. The nanopores are created by first bombarding the membrane with high-energy ions, which leave tracks of damage in their wake. The membrane is then exposed to an etchant, which eats through the damage tracks to create the nanopores.

However, it is nearly impossible to measure the pores accurately with common techniques used for nanostructures, such as electron microscopy. Therefore, the team undertook to develop a way to use x-rays to observe the pores as they formed.

“This allows us to study the size and shape of the pores as well as the key influences, in particular the temperature and the concentration of the etchant,” said Alex Kiy, also a PhD student in the Department of Materials Physics.

“These parameters change both the speed of etching and the size and the size distribution of the pores, so we realised we needed very precise control.”

To streamline the process the team decided to build a portable etching chamber that could sit in place at the synchrotron, to allow live observation of etching, giving new insights into the process as it unfolds.

Using these observations, the team learned how to produce pores of particular sizes and shapes with unprecedented control.

The development specifications for the device, however, were not simple. The unit needed to fit within the target space at the synchrotron beamline (less than 10 centimetres across), and hold the sample at a specific angle to the incoming X ray beam while hot etchant was pumped around it. As the etchant is a strong X-ray absorber, the flow had to be routed so it did not block the X-rays significantly nor alter the etching process with any turbulence.

Lastly the liquid had to reach the sample at a well-controlled temperature – a challenge that was solved during a visit to the departmental coffee machine.

“We run the etchant through a spiral tube in a heating block, similar to the way some coffee machines preheat water.  This allows us to optimise the etchant temperature before it enters the cell,” said Professor Kluth.

The team worked with the RSPhys workshops to design and build the device, using a wide  range of fabrication techniques, from machining to 3D printing.

To design a unit for a such measurements was challenge enough, but it also had to be robust enough to be moved safely to the synchrotron, said Alex Kiy.

“Because we are pumping the liquid through the cell, there are so many places it can leak, but you can’t spill hot etchant all over the synchrotron beamline!”

“The development was a multi-year process, but now we are at the stage where it works reliably and with precise control over the experimental parameters,” Mr Kiy said.

Coupled with the real-time analysis of the X-ray data, masterminded by Shankar Dutt, the system can now be applied to myriad problems, says Professor Kluth.

“It could be used to study the in-situ functionalising of nanopore surface and the growth of sub-nanometer porous structures such as metal organic frameworks inside the nanopores.

“It could also be useful for mimicking biological processes – and I’m sure there are other things we can use it for that we can’t even imagine yet!”