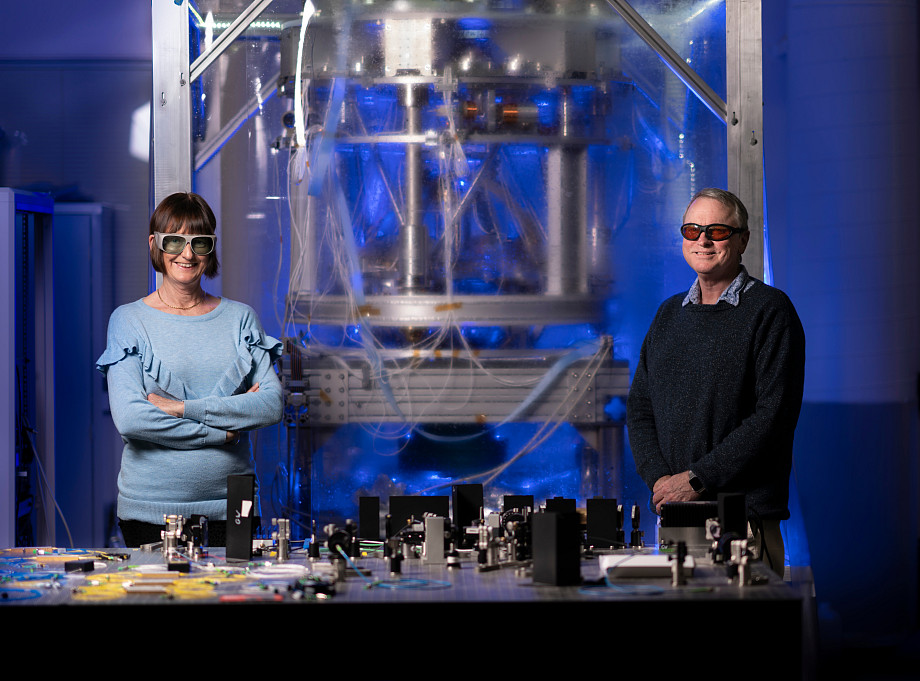 The 2020 Prime Minister’s Prize for Science has been awarded to two physicists from The Australian National University (ANU) and two scientists from other institutions for their ground-breaking work to detect ripples in space and time known as gravitational waves.

Following an epic 100-year quest set by Albert Einstein, gravitational waves were detected on Earth on 14 September 2015. The signal came from the collision of two massive black holes 1.3 billion years ago, more than 10,000 million, trillion kilometres from Earth. That’s almost a tenth of the way back to the beginning of the known Universe.

The detection has ushered in a wave of new discoveries – including the mergers of two black holes, the collision of two neutron stars and possibly also a black hole eating a neutron star – which have helped to solve many mysteries of the Universe.

“Big questions are hard to answer. When these scientists embarked on their quest to detect gravitational waves, success was not guaranteed in their lifetimes. Looking to the edge of a black hole to explore the darkest parts of the Universe with a new type of telescope was an intergenerational experiment,” Professor Schmidt said.

“The detection of gravitational waves in 2015 changed the course of physical science and has led to a new era of gravitational-wave astronomy, allowing scientists to unlock many age-old mysteries of the Universe.”

Funded by the Australian Research Council (ARC) and led by ANU, Australia is one of the four partners in the Advanced Laser Interferometer Gravitational-wave Observatory (LIGO), which comprises twin detectors in the US that are the most sensitive instruments ever built. Under Professor McClelland’s leadership, ANU has supplied equipment and techniques that are used in the Advanced LIGO detectors.

The international collaboration, which involves the European Gravitational Observatory with its gravitational-wave detector in Italy called Virgo, has now made more than 50 detections of gravitational waves since the first detection in 2015.

Professor Scott, who is the Leader of the General Relativity Theory and Data Analysis Group at ANU, and a Chief Investigator of the ARC Centre of Excellence for Gravitational Wave Discovery (OzGrav) said many scientists, prior to the discovery, thought that gravitational waves did not exist or were too small to be detected.

“We worked tirelessly for a quarter of a century without results, and with no guaranteed prospect of a breakthrough,” said Professor Scott – the first woman to receive the Prime Minister’s Prize for Science for an achievement in physics.

“My team at ANU contributed vital components to the LIGO Data Analysis System through which the detection signal was processed in 2015. To finally detect gravitational waves, and now to be recognised for this breakthrough with the Prime Minister’s Prize for Science, is truly remarkable. The enormity of it all is still sinking in.”

Professor McClelland, Deputy Director of OzGrav, said the detection of gravitational waves has been a global effort involving a thousand scientists.

“The Prime Minister’s Prize for Science is a fitting acknowledgement of the vital role played by Australian researchers in this landmark achievement in physics.”

“Due to the vision, innovation, tenacity and prodigious research efforts of the four prize recipients, over three decades, Australia played a vital role in these momentous discoveries,” Professor Freeman, from the ANU Research School of Astronomy and Astrophysics, said.

The Prime Minister’s Prizes for Science are Australia’s most prestigious awards for outstanding achievements in scientific research, research-based innovation and excellence in science teaching. They are a tribute to Australia’s world-class science community, and the critical role they play in inspiring the next generation of Australian scientists and innovators.