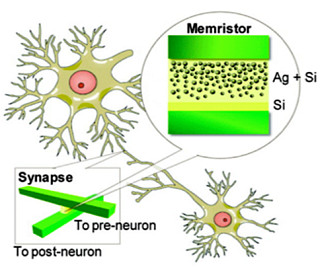 Neuromorphic computing is inspired by the operation of the human brain and is of great practical interest for applications such as pattern recognition, auditory signal processing and autonomous robots. This has led to research on an exciting new range of solid-state neurons and synapses based on non-volatile resistive-switching and volatile threshold-switching in metal-oxide thin films. This project aims to advance the understanding of these switching mechanisms and to use this knowledge to extend the functionality of existing devices. The research will be informed by studies of resistive random access memory (ReRAM) that exploit similar materials systems and physical processes.

The synapses of interest are based on resistive switching in two-terminal metal/oxide/metal devices. These use resistance changes mediated by the drift and diffusion of anions or cations to emulate synaptic plasticity; the ability of synapses to strengthen or weaken in response to stimuli. Additional functionality is enabled by spike-timing dependent plasticity (STDP); the ability to increase or decrease resistance in response to the relative timing of two or more stimuli. The solid-state neurons of interest are based on the nonlinear circuit response of coupled relaxation oscillators. These have been shown to emulate many features of biological neurons, including threshold spiking and voltage dependent frequency modulation. The active devices in this case are inductor-less relaxation-oscillators based on threshold switching, or current-controlled negative differential resistance (CC-NDR), in particular transition-metal oxides (i.e. VOx and NbOx).

This project will involve both experimental and theoretical/modelling, including: the fabrication of test devices, materials and device characterisation, and finite element and LTSpice modelling.

Through the project, the student will develop skills in the area(s) of: